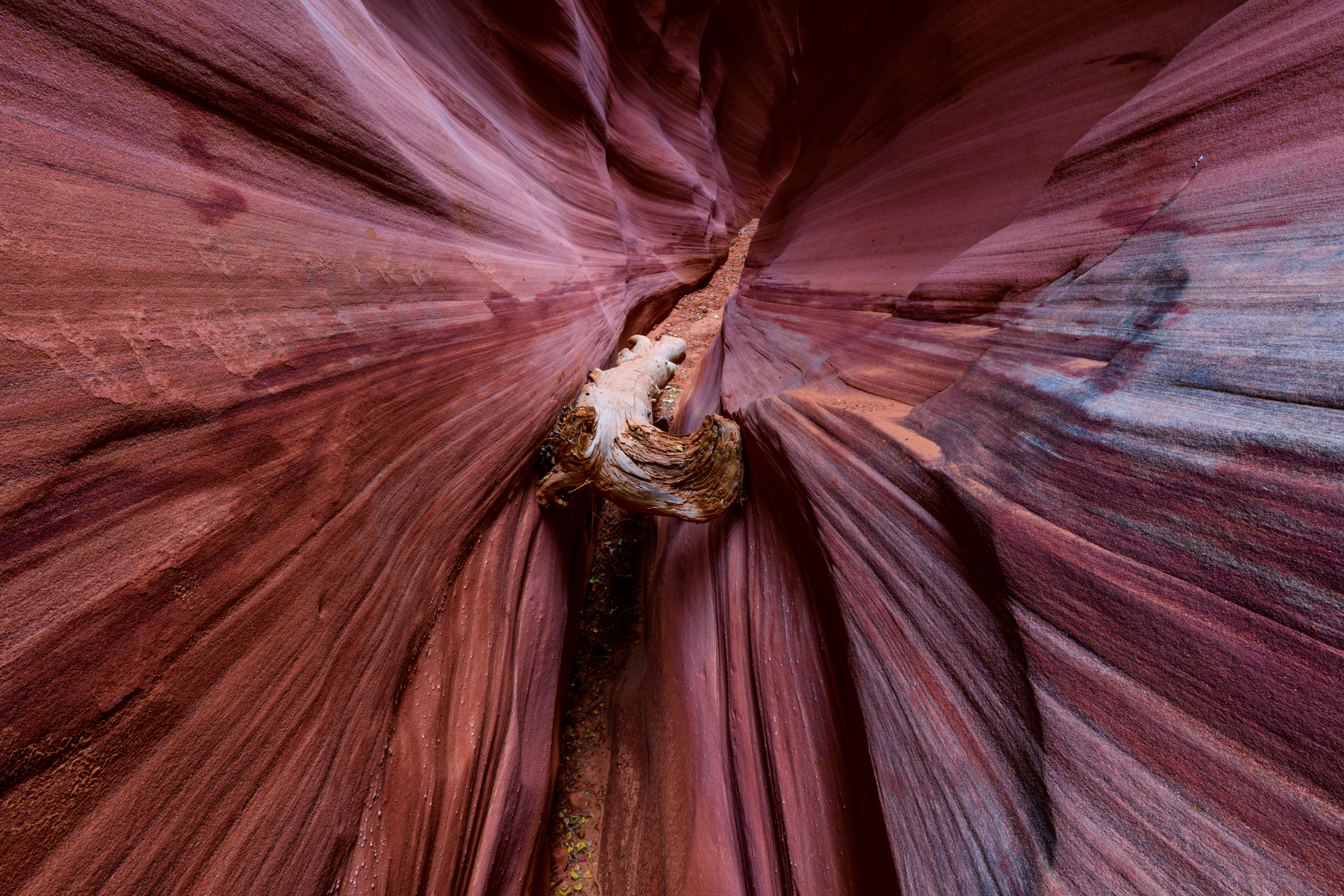 Roughly 9.5 miles East of Escalante, UT, on Highway 12, Spencer Flat Road breaks off to the right.  This comes just before the highway drops down to the Escalante River drainage.  5.8 miles down this dirt road (a high clearance vehicle is necessary for this road), we hit a junction where the main road goes right.  It wasn’t hard to distinguish between the main road and a two track at the junction.  We followed the main road for another 2.6 miles and this put us smack dab in the middle of…nothing really. But the road ended here so it was easy to know where to stop.

Brett had the GPS coordinates he picked up from a post here.  These were certainly helpful as there was no specific route or trail to follow, as this was not a high traffic area of any kind.  After donning our caps (one of my favorite hats)  and loading up our packs, we headed Southeast for a moment on a beaten path.  Here we ran into a white sandstone drainage covered in Moqui Marbles.  We spent a few minutes arguing about who had the biggest marbles and then we proceeded East up the drainage toward the South side of a prominent sandstone butte. 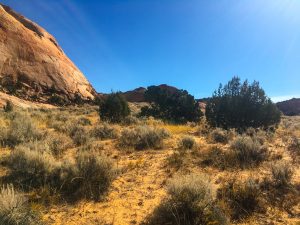 After climbing out of the small drainage to the South we enjoyed some fantastic sand hiking.  I especially love the feeling of getting about 15 inches per step vs 3 feet with the same amount of effort.  Luckily the sand hiking did not last long and we climbed up onto the sandstone to our East. 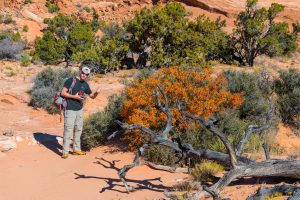 At this point Brett realized he had forgotten his camera.  However he had brought his pack and tripod, which was now quite useless.  Instead of opting to run back and get his camera, we ditched the tripod in a vibrant bush and headed on our way. 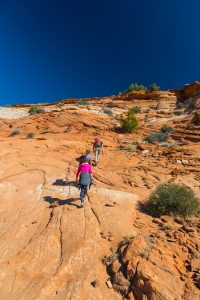 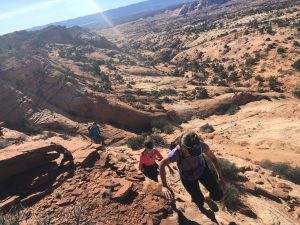 It looks steep, but it isn’t bad at all and your shoes stick to the sandstone with Spiderman-like power.  We crested the top of the mountain and then headed basically East/Northeast, following a cairn here and there, and hiking on foot trails and game trails alike.  We crossed a couple of small hills and generally headed toward a pyramid-shaped peak with a saddle to its right.  At the top of the second hill we stumbled across a pair of sheds. 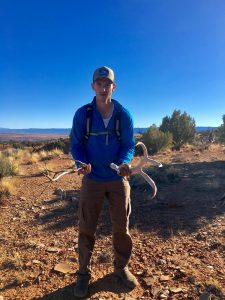 One side was of a non-typical variety. 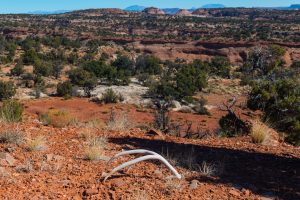 Eventually we hit a drainage that headed East and began to follow it.  We very quickly ended up on the rim of a small canyon.  Brett decided to venture out to the tip of a prominent point.   It made for a cool pano opportunity.

Panorama of the drainage that drops down into The Big West Fork of Red Breaks. Brett is on the left.

We hiked down the rim a little bit until we found an area we could drop down in.  At this point it was apparent we were near the beginning of the descent down the Big West Fork.  It was a perfect place for lunch. 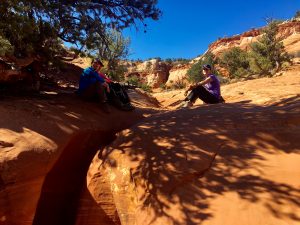 I ate my first ever peanut butter and banana sandwich and it was actually quite delightful to be honest with you.

Some people opt to cross the wash here, and head up over the next hill to drop down into the main canyon of Red Breaks, descend that canyon to the junction with the Big West Fork, and then come back up this slot. 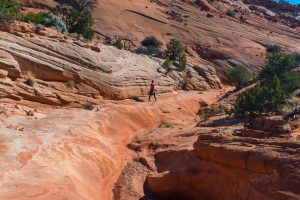 According to descriptions, that requires a 30′ rappel and time was already an issue for us so we decided to do a down and up of The Big Right Fork only.

After a short break we began to head down canyon.  We quickly came to a dryfall of about 9′ that took a little work to get down, but wasn’t too problematic.  The canyon was somewhat open for a bit, but often very narrow on the bottom which made hiking on the sand difficult. 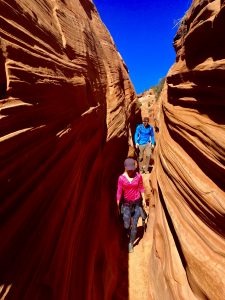 This canyon was a great deal of stemming, bridging, and chimneying simply because the gap at the bottom was so narrow. 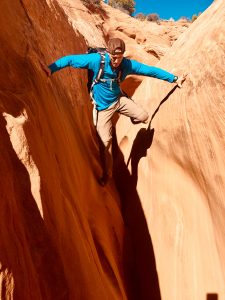 There were a few obstacles that required some climbing over or under chockstones, which wasn’t bad for someone without a pack.  We soon got to a point where the slot narrowed up significantly and dropped down.  This is not a hike for individuals of larger stature. Brett opted to leave his pack at the top to make the going easier.  I opted to take my pack, I mean I did come for pictures.  It was quite the struggle getting down with the pack.  I climbed down first without it and then Jenny handed it down to me. 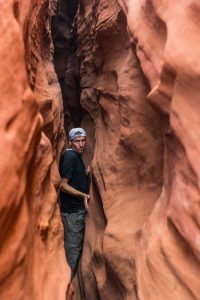 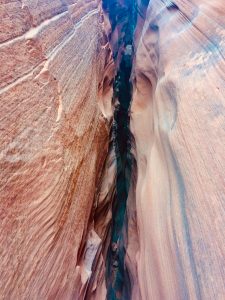 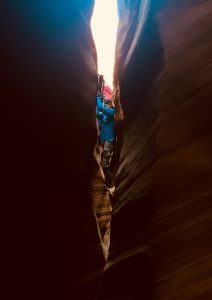 The problem was that I had to chimney down in but in so doing my back had to be against the rock and that tends to be where my pack usually goes.

Eventually we all made it down into this deep section where it was much darker and cooler.  This part had no light breaking through, but as we rounded another bend, we began to see the glow.  Here is where the camera came out. 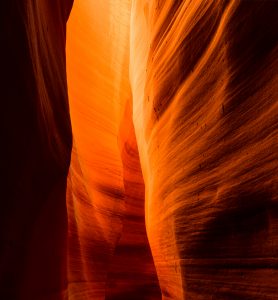 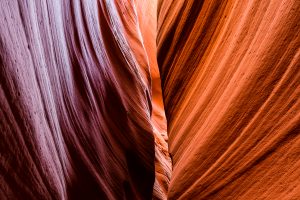 It’s really quite an amazing feeling to see that glow bouncing off the sandstone around you.  I took it all in, shooting some video, and taking some photos.  Apparently the rest of the group didn’t care so much about the glow and they just kept on moving…in fact they straight up left me!  When I finally got around to heading down to look for them, they were already near the bottom where the canyon junction is.  And that next obstacle was a real bugger to get down when I had nobody to hand my pack to.

Once I caught up to them sitting around down near the end of this section of canyon, I kindly thanked them and we began back up the canyon.  From here it was all retracing of our steps – it isn’t hard to find your way in a slot canyon. 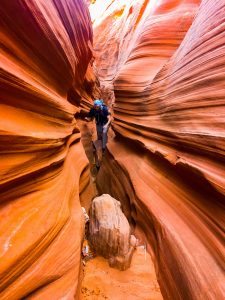 It was actually a little bit easier heading up canyon than down canyon.  One person in our group just about put their hand in some green slime that was dripping down the wall of the canyon, but that was about as eventful as it got.  Upon emerging from the canyon we decided to return to our car without the aid of the GPS.  It wasn’t too difficult with Brett’s superior direction.

We ended up spending close to 5 hours from the time we left the car to the return.  This really was a beautiful canyon.  It takes some work getting to and getting through, but it is a great explore and goes for quite a distance.  I highly recommend this hike to anyone looking for something different near Escalante, UT.  Just be prepared to use your route finding skills.

Please enjoy some more pictures from the hike below.