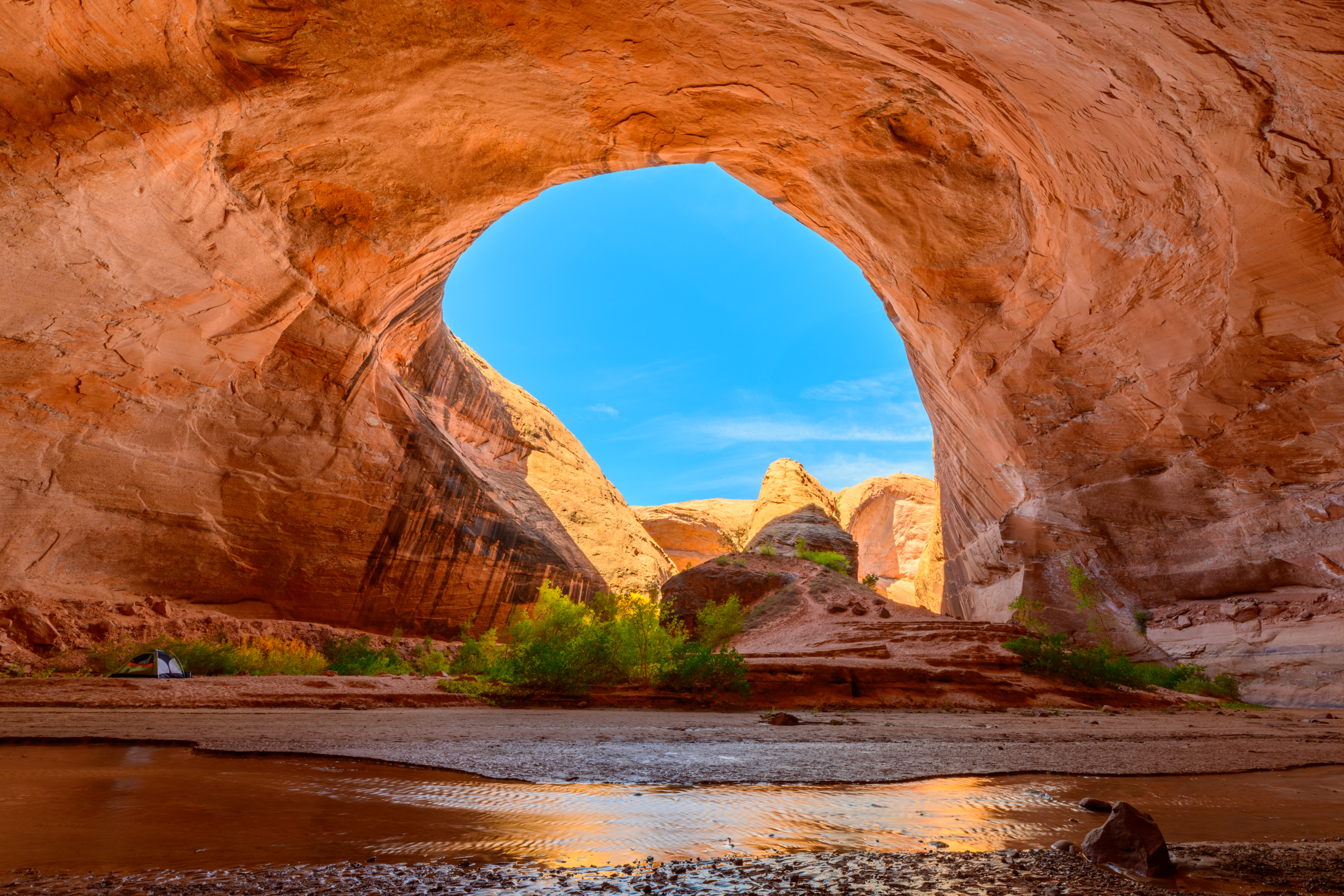 Coyote Gulch via the Moki Steps aka the Sneaker Route

Friday morning in late October we left Boulder, UT around 10 am.  We had spent the night in a fantastic, secluded cabin, courtesy of Mike & Kelly Anderson.  It was a super cool place that could only be accessed by driving through a running creek.

We headed South on highway 12 for 21 miles or so the the Hole-in-the-Rock Road.  We spent the next hour or so loosening our insides thanks to the washboard nature of these high-traffic dirt roads.  Brett pretty much aims for the washboard sections any time he can.  Not only that, but he has a serious case of “Drive on the Opposite Side of the Road Syndrome.”  As of the writing of this post we are working on an intervention for him.

So this had been Brett’s day for planning, he had decided that we should hit Coyote Gulch via the Sneaker Route.  This way was much shorter than any other access to the gulch, and super simple he said.  He made it sound like it was a casual stroll down to the water’s edge.  I took his word for it with a great deal of hesitation after he threw in phrases like “some people used a rope,” and “there were a few people who froze up.”

After 36.2 miles on Hole-in-the-Rock Road, we took a left onto 40 Mile Ridge Road (don’t be confused when you see 50 Mile Ridge Road on the right, prior to 40 Mile Ridge Road).  4.3 miles down this dirt road sits a corral and large water tank.  We parked here, prepped our gear, and using the SWEETEST KNIFE EVER that I just purchased from Amazon, I cut open a Dixie Sweet pomegranate from our yard to begin the trek. 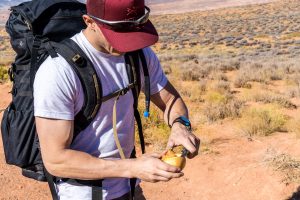 (Oh and before I forget, if you want to backpack and carry camera gear I found the best bag for this, it is the Mountainsmith Tanuck 40L backpack.  You really need to check it out, I’ve used it for the past couple of months and it does a fantastic job.  To make it work right you need to purchase an internal camera unit (ICU).  I wouldn’t get one from Mountainsmith though, I would recommend this medium slope from F-Stop Gear or even the large ICU if that worked better.)

The trail here is fairly well developed. You head North and stay to the left of a prominent sandstone butte. 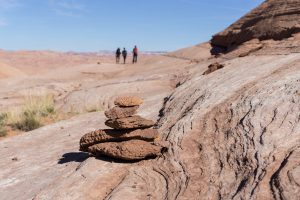 There are cairns to mark the way when you hit the sandstone and we hugged the left side of this butte as we made our way around it.  For some reason, someone stuck the thing right in the middle of where the trail should have gone.  Here is the link to a map.  Our route is the first part of the blue one down to Coyote Gulch and back.

After passing the sandstone butte the trail leans East a little bit, but not much.  Here we got to enjoy some lovely sand hiking for a bit before we reached the sandstone.  Once you pass the sand hiking you are a little over half way to the Gulch. 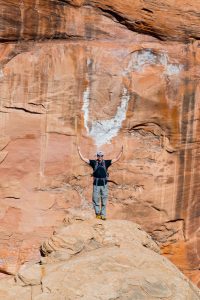 We continued in the same direction, using the occasional cairn as a reference.  Brett told us to start looking for the White Eagle on the cliff wall once we got closer to Coyote Gulch.

Sure enough we found it, but a debate ensued as to whether or not it was an eagle (Brett’s opinion)  or a snake (Alexa’s opinion).  Nobody was thrown over the cliff, but words got pretty heated.  In the end we determined it is neither an eagle or a snake, but rather an Eskimo riding an iguana.

Once we spotted the white mark on the cliff wall, we headed straight for it.  This led us to the “casual stroll down to the water’s edge.”  If you’ve ever scrambled up a steep sandstone section and and then looked back down and wondered how you would get back down, that was kind of the feeling here. 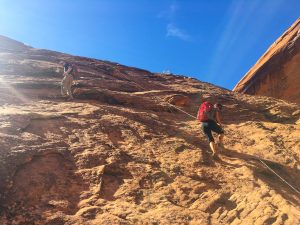 The only difference is that we hadn’t scrambled up to this point, we were just descending of our own accord.

I’ll be honest, with the big pack on my back, I was grateful that someone had left a permanent rope here that maybe wasn’t absolutely necessary but leant to a feeling of security while descending this section.

We descended into a group of yellow cottonwoods at the bottom of the gulch. 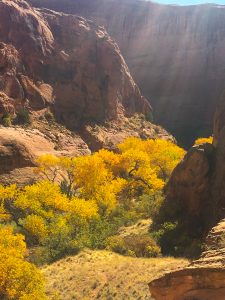 This is a really cool feeling going from complete arid desert sandstone with little to no vegetation, into a river bottom full of lush plants and trees.  Once everyone was on the ground we headed upstream with the intent to see Jacob Hamblin Arch.  The arch is not far away as the crow fly’s, but due to the meandering of the creek, several hundred yards turns into more like half a mile or more.

Shortly after heading in the direction of the arch we stopped for lunch.  A lot of this hike is in the shade because of the deep alcoves that have been created.  After wolfing down a chicken wrap and some snack mix, we picked up and head upstream again.  The alcove before the Jacob Hamblin arch is incredibly deep and awesome.Only one campsite was set up in this alcove, and we spent some time taking some shots.  It is hard to really encompass how vast the alcove is with a photo.

After taking some shots and loaning Brett my tripod (he either brings a tripod and no camera or a camera and no tripod on these hikes) we headed over the the alcove that puts Jacob Hamblin Arch on the downstream side.  This was a very cool alcove as well, and the arch makes it even more awesome.

The light wasn’t great when we got there so we elected to go see the Swiss Cheese falls and then come back up later in the day to the arch. 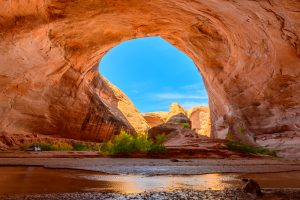 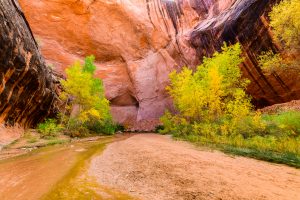 As we made our way downstream, golden cottonwoods line both sides of the water.  It’s incredible how slowly the water moves here.  The loss of elevation is very gradual.

Somewhere around a mile downstream we finally reached the Swiss Cheese Falls.  This is not a large waterfall by any means but it is certainly interesting with its’ intricately carved passages where the water flows through.  And while we had planned this trip without fall colors in mind, we happened to be in this location at the perfect time for the cottonwoods to be in full fall majesty. 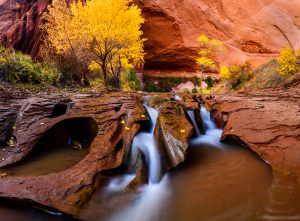 We spent probably close to 45 minutes hanging out here and getting different angles of the falls.  Just a week or so prior I had to purchase a new Circular Polarizer from Lee Filters because I had dropped my last one and it cracked through.  Well, this very same expensive piece of glass fell again and cracked. Things like that can make a trip expensive in a hurry.  Try to avoid dropping expensive glass on your outings.

One very large scout group passed us, but other than that the traffic in the gulch seemed relatively mild.  Following the long break at Swiss Cheese Falls we head back upstream to catch Jacob Hamblin Arch in better light before heading out of the canyon.  During the hike back, we were alerted to the fact that a scout had been lost.  He had apparently decided to hike alone ahead of the group.  We kept an eye out for him and were glad to know that they found him a mile or two ahead of where they had intended to climb out of the canyon. 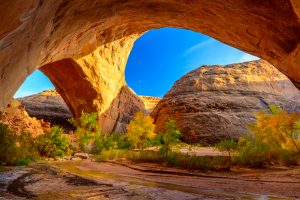 We made it back to Jacob Hamblin Arch in time for a little better light.  While the girls napped on some logs, we took some shots of the alcove and arch and decided to call it a day.  We quickly headed back to the Moki Steps that we had descended to get down to the canyon floor. 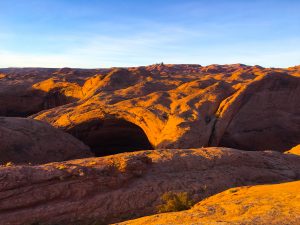 As I mentioned before, it is much easier to ascend steep sandstone.  When we got to the sandstone climb up the Moki Steps, the rope was not as vital.  It was certainly possible to climb out without the rope.  We quickly climbed this and were happily on our way back to the jeep.  We made good time and the sun set just a few minutes before we got to the parking area.

Please see the photos below for additional images of our trip down into Coyote Gulch.