You are here:
May 29, 2017UncategorizedBy Jeremiah Barber 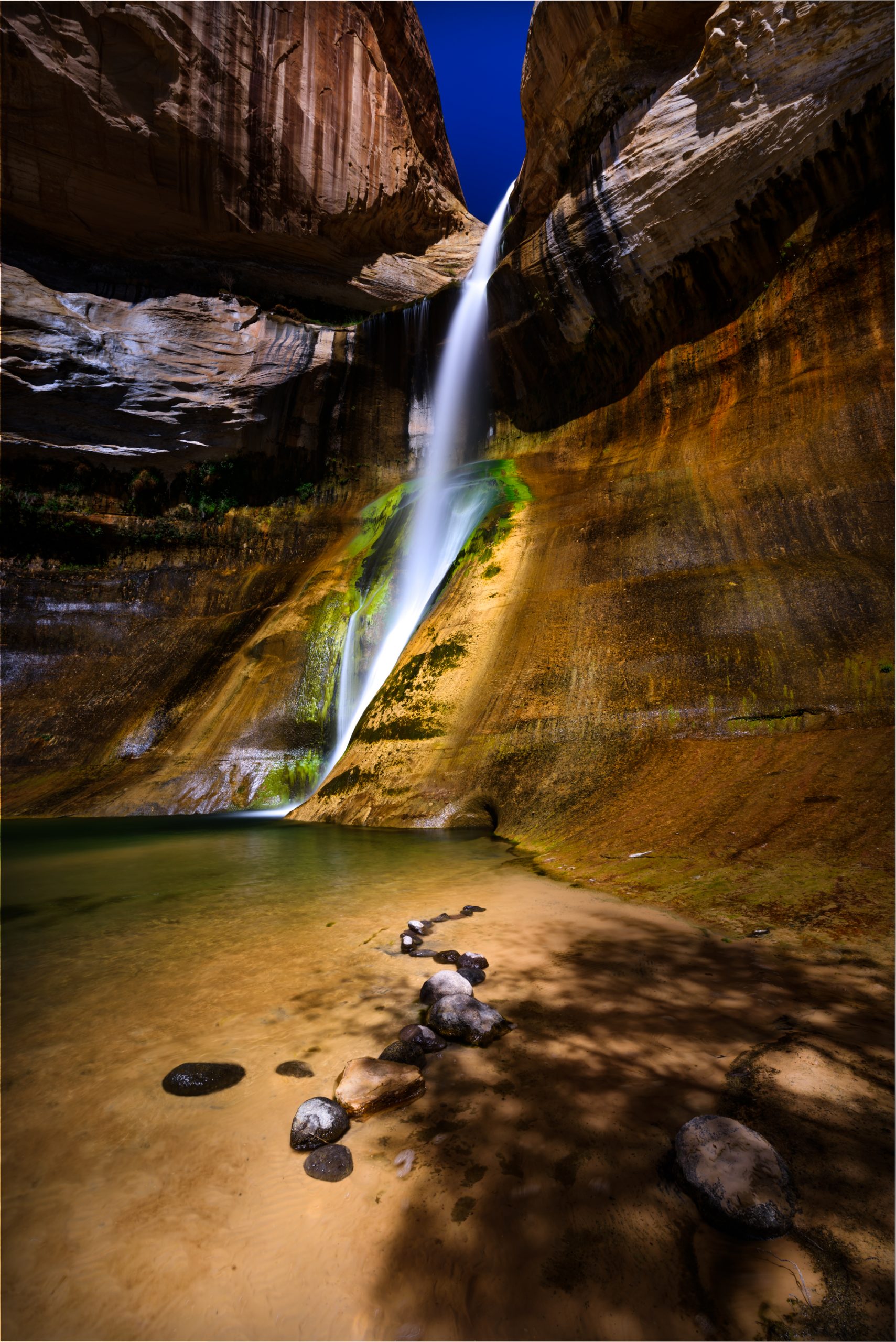 Saturday morning we drug the kids and my brother and sister-in-law out of bed shortly after 4 am.  After prepping some mostly healthy trail food, we backed out of the driveway around 5:20 am, destination Lower Calf Creek Falls between Escalante and Boulder, Utah on Hwy 12.  Most of the crew couldn’t fathom why we might be leaving so early.  I knew suggesting a 3 or 4 am departure would not have gone very well.

Fast forward to 8:45 am.  We pulled into the Lower Calf Creek trail parking lot and, as it turns out, campground as well.  We waited for a car to pull out and took one of the two remaining parking spots.  After spending ten minutes prepping our bags and getting the kids ready to go, we paid our $5 day use fee and headed on our way.  A few hikers were headed out when we pulled in, but the flow wasn’t terrible.  The high for the day was forecast to be in the mid 70s, and by 9 am no jackets were needed.

This was our first time on this hike, and the reports I read indicated it was just shy of 6 miles round trip.  After several hundred yards we approached the beginning of the trailhead.  The trail was easy and lacked any significant changes in elevation.  For the most part, the trail follows the path of the creek on the North side.  The two main diffficulties of the hike were the bountiful sandy portions of the trail and the constant need to step off the trail to allow hikers from the other direction to pass. 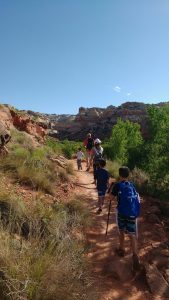 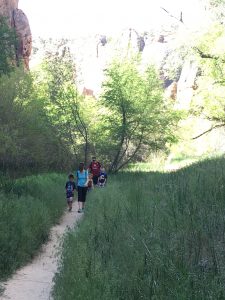 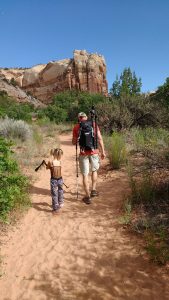 En route to the waterfall there are a series of numbered markers.  For the majority of the hike we attempted to identify the meaning of the markers.  Were they tenths of a mile, quarter miles, what exactly?  Half way back we noticed that a group was using a small pamphlet to read about what a particular marker meant.  It is a good idea to pick up one of those pamphlets at the beginning of your trek.  Especially with kids, I imagine it would be a great tool in taking their mind of the distance of the hike.

The kids did awesome, and we arrived at the waterfall about an hour and 20 minutes after beginning our hike. 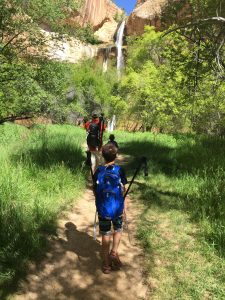 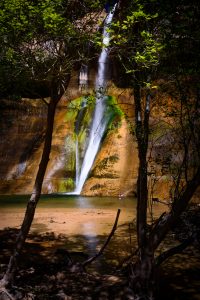 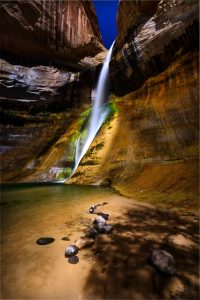 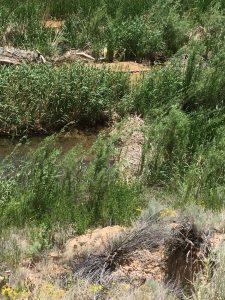 Along the way we saw beaver dams and lots of trout.

We also caught glimpses of a Western Tanager and some Black-headed Grosbeaks.  It turns out that from the parking lot the hike is closer to 3.2 miles one way, but the kids made it fine and then we spent close to an hour at the waterfall while the kids snacked and played and I was busy taking 4 minute exposures of the falls. 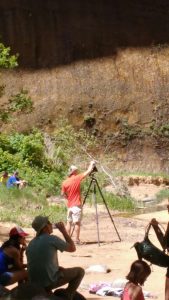 The falls were more powerful than I anticipated from pictures I had seen.  The mist can travel a good distance, and the water is frigid.  My boy made it in up to just past his knees, but that was it.  There are a lot of trees around for shade, but depending on what time of day you arrive, the shade can be a bit cool with the cool mist hitting you.  Memorial Day weekend is probably not the best time for this type of photography.  When we arrived at the falls there were eight other people there.  By the time we left there were probably 50 or more people at the falls.

On the way back we encounter a steady flow of humans, and I mean steady.  The trail is very narrow in many areas, and this prevents two way traffic.  A lot of time was added to our hike back simply because we had to step off the trail so often to let large groups go by.  On the way back we ended up asking someone at which marker their pamphlet indicated the Fremont Indians pictographs would be viewable from.  They told us #8 and we finally had something to look forward to with the markers.  Beyond that, the markers were just a count down to the time we could grab lunch at the car and head out. 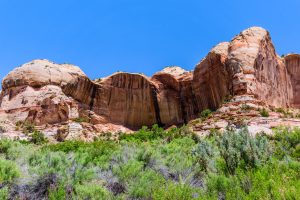 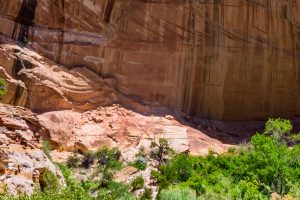 We did see the pictographs up on the cliff side on the opposite side of the creek.  They were several hundred yards away, but plainly visible.  They had to be large paintings to see them so clearly from where we were standing.  They were very intriguing and definitely worth making sure you see them on the way in or out.

Now headed back toward Escalante and we  decide we had enough time to attempt Peek-A-Boo or Spooky slot canyon with the kids.  Which turned out to be about 26 miles of washboard awesomeness down Hole-in-the-Rock Road.  Then a left at Dry Fork Wash. 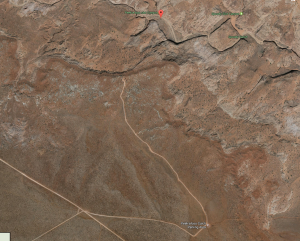 At around half a mile in there was a parking area on the right.   The minivan in front of us was directed to park here, and we pulled up to the ranger directing the parking.  He told us we probably had plenty of clearance and that he understood there was now room at the trailhead so he let us continue on.  He mentioned that it had been absolutely crazy in the morning, and we were instantly glad we had timed this adventure correctly as well.  We stayed to the left and headed up the rather uneven road to the trailhead.  If you are in a low clearance vehicle, you will want to park in that area too, but it adds over 1.5 miles to your total hike.

Once at the trailhead a very kind ranger took a few minutes to talk to the kids and give them Junior Ranger badges.  The Peek-A-Boo and Spooky slot canyons are usually done as a loop, but with the kids already having hiked 6.5 miles, we knew we were limited as to how far they could go.  The kids really wanted to do Spooky, but after talking to several groups we passed, we figured that Peek-A-Boo would be the shorter and easier option for the kids and us. 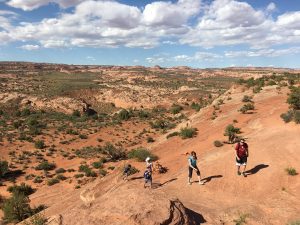 Once on the trail it quickly drops down into the wash, the fairly steep drop is mostly on sandstone but the last part is sandy.  Every time you go down, you inevitably think about the return trek.  I imagine that in the dead of summer, this is not a pleasant climb out.  For some, it appeared it wasn’t a pleasant climb out now either.

Once down in the wash you follow a sandstone wall for a hundred yards or so and then it opens up.  You can go left to Dry Fork Wash, straight ahead to Peek-A-Boo, or right to Spooky.  They recommend doing the loop by going up through Peek-A-Boo and then coming down through Spooky to avoid having to pass people going the opposite direction.  Again, we decided just to do Peek-A-Boo today. 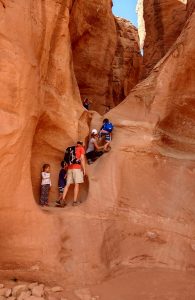 The beginning of Peek-A-Boo can look daunting to some, but is easily managed and is the most difficult obstacle you will encounter in this canyon.  It looks like about a 15-20′ climb with a series of footholds carved into the sandstone.  The kids needed a little bit of encouragement and assistance, but they made it up.  The kids made easy work of most of the slot, as size was to their advantage in many places. 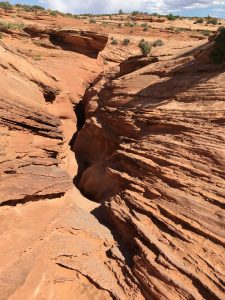 Once we reached the end of the slot, we turned back around and headed down the way we came.  The slot canyon traffic wasn’t bad by this time of the day.  At one point we got to learn about bridging and stemming to cross areas of a slot canyon.  There were also a few natural slide the kids had fun going down.  We made it back to the beginning the slot canyon fairly quickly, as it isn’t terribly long.  We assisted everyone down the initial obstacle with the help of a few kind individuals standing at the bottom who helped the kids get down the bottom section. 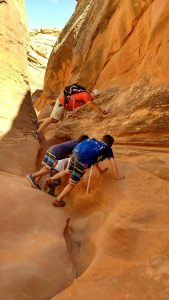 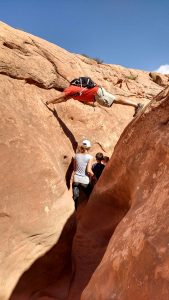 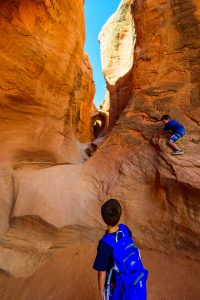 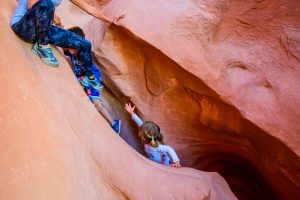 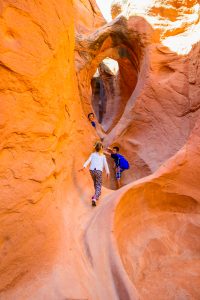 Once out we headed straight for the car.  It was uphill, just like we had anticipated.  But we were able to complete the climb out fairly quickly and were on our way just after 4 pm.  As we drove down the dirt road between the trailhead and the first parking area, we encountered a human with what appeared to be a very tired child. 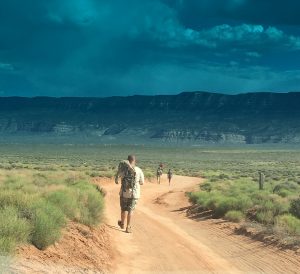 Somehow the drive out seemed to have even more washboard than the drive in.  It made us super grateful for paved road once we hit highway 12 again.
On the way back we decided to go the route over Cedar Mountain.  They still have snow in some places up there, absolutely crazy how much snow the mountains received this year. 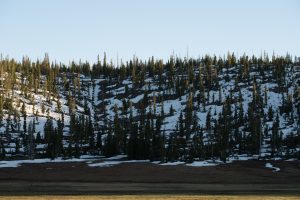 Around 10:15 pm we pulled back into our driveway.  The kids were dead asleep and I had to remove and dump the sand out of their shoes and socks before I carried them in to bed.  All in all it was a pretty successful day trip.

Please enjoy a few more pictures from our trip. 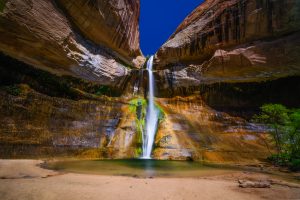 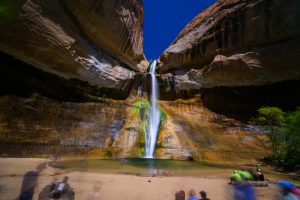 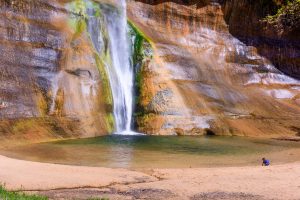 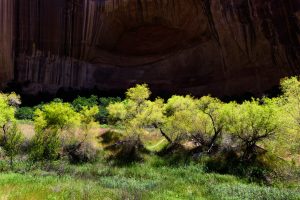 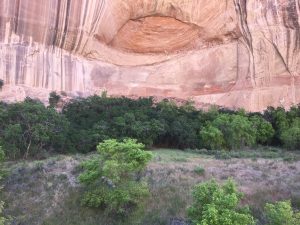 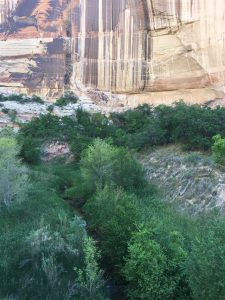