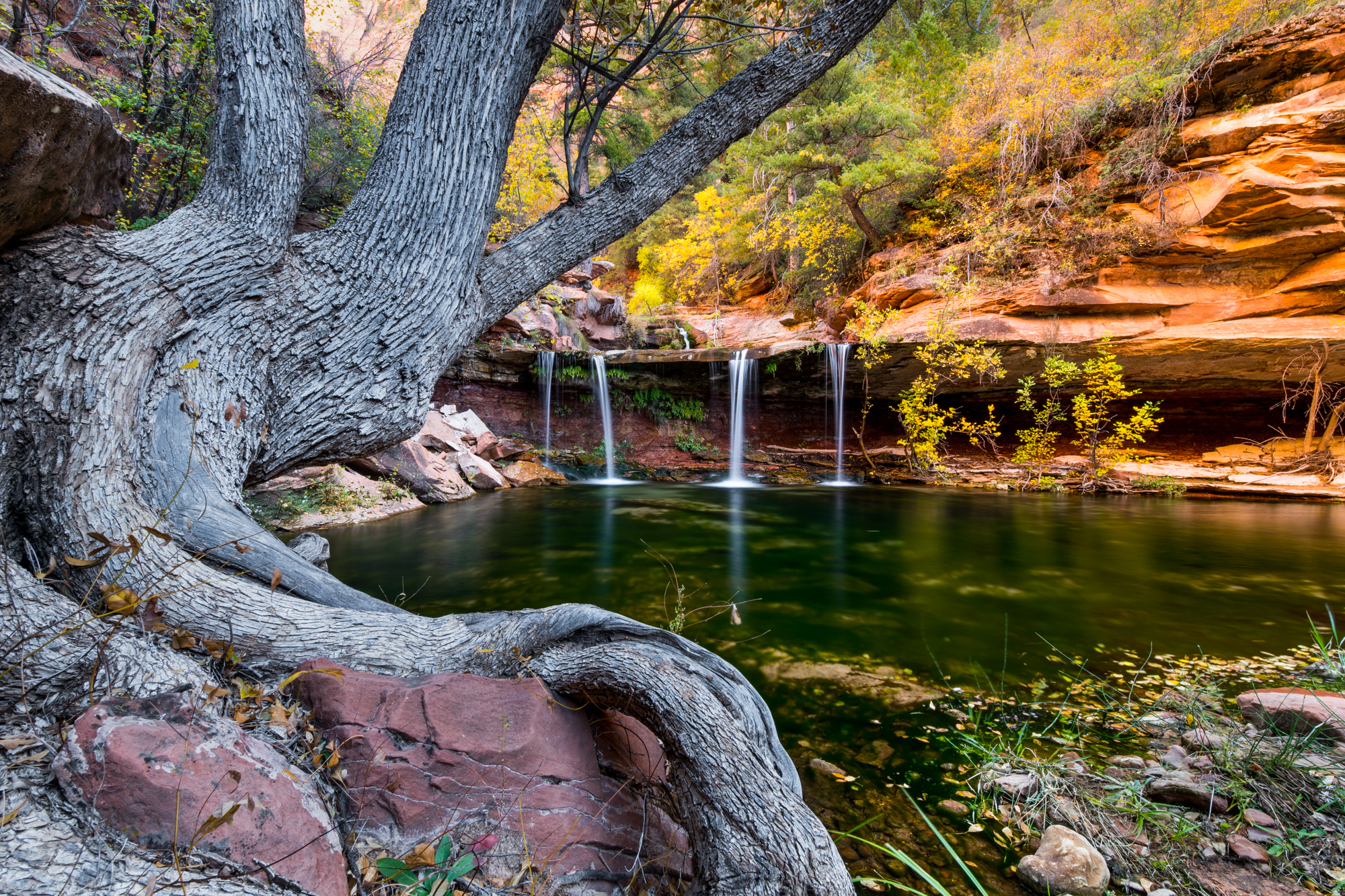 3:30 am, iPhone alarm goes off, just over an hour earlier than normal.  Quick bowl of oatmeal, with raisins, pecans, and dates.  I throw on some warm layers, my neoprene socks, some good sticky river shoes, and my favorite hiking pants of all time, and head for the door, destination – Right Fork of North Creek in Zion National Park. 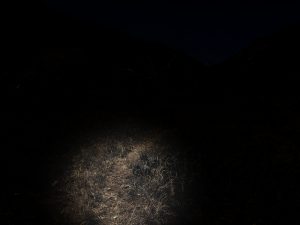 It’s not bad living less than an hour from Zion National Park, makes it a little easier to get an adventure in and still sleep in your own bed at the end of the day.  This particular day was in mid-October.  The high was set to be in the 60s and the low possibly down in the 30s.  I picked up Mike and Ryan and we made it to the Right Fork Trail head a few minutes after 5 am.  After readying our packs we clicked on our headlamps and headed East.

At 5 am in October, the landscape looks a little less colorful.  (see image)

After roughly a quarter of a mile or so we arrived at the edge of the bluff and began picking our way down the lava rock.  Here it is somewhat steep and slightly more precarious when it is dark.  The moon was waning and  lower on the horizon, so it didn’t provide us much light.  If you do this hike, be prepared to use your hands a little bit to keep your footing on this climb down.  After the fairly steep descent of several hundred feet, you end up very near the river.  We quickly found it and headed North along it’s banks for several hundred yards.

This point is one place you could really mess up your route if you head out in the dark, the confluence of the Left and North Fork of North Creek.  Here we had to cross the river what seemed like multiple times.  I’m sure it is much easier in the daytime, but the confluence isn’t a clear merging of two rivers, it seems to break apart into several little branches.  We kept heading to the right until we were certain we had made it to the eastern watercourse.  On several occasions our headlamps illuminated eyes on the river banks.  One was a coyote that took off pretty quickly, and several times we came upon rocks that had wet paw prints on them from seconds before.

After assuring ourselves we had found the correct stream, we followed the water for the next hour and a half until light started to break through.  We hadn’t done a very good job of finding the trail, simply because we couldn’t see the canyon walls and mostly just stuck to the creek.  This resulted in a few instances of bush-whacking, but we ultimately were headed in the right direction.

Somewhere just past 3 miles in we were able to click the headlamps off and make out the trails a little more easily.  There isn’t necessarily one trail, but there are some “beaten paths.”  If you can see the river and the canyon walls, it is fairly easy to pick out the path as it takes pretty much the most direct route through the canyon.  You end up crossing the river multiple times but there is very little slogging up the river, if you have daylight that is.

Shortly beyond 4 miles in we came to a narrow sections of rock with pools and small cascades.  Here is the first and only place you have to get wet up to more than your ankles.  If you take the most shallow route on the right, the water should go just above your knees.  It’s not warm water, but it is a short wade. 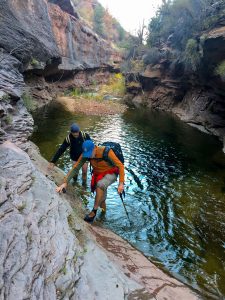 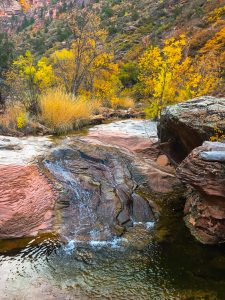 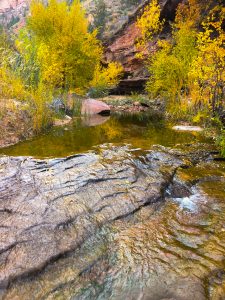 I pulled out my phone for a few shots but ultimately we decided to keep moving to make certain we got to Double Falls with good light.

We continued on for another mile past these pools and falls and rounded the corner to the spectacular view of Double Falls.  It really is a gem.  I highly recommend, or rather challenge you to make the trip if only to see these falls. 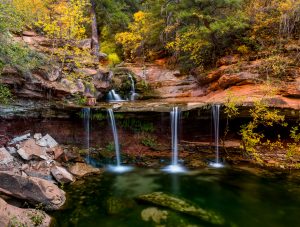 The setting is fantastic, the colors were a plus.  Although the temperature seemed to progressively get colder through our hike, it still was not as cold as I had anticipated.  For the most part I was plenty warm.  Ryan wore shorts, that’s just how he rolls.  I think he got a little cold waiting for us to take pictures of the falls though.  We were there for at least an hour, maybe longer. 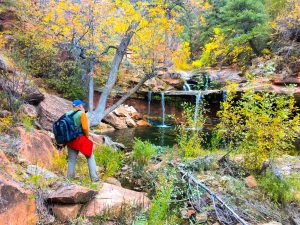 Mike soaking up the scene. 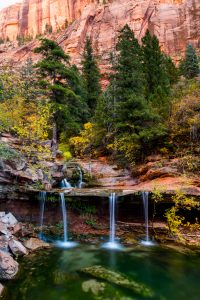 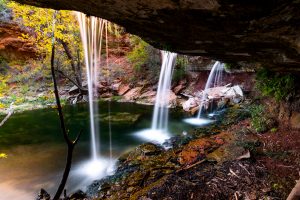 There is a large boulder just below the falls that creates a perfect vantage point.  Ryan spent most of the time hanging out on this boulder.  It seemed like a great place to be. He looks happy. 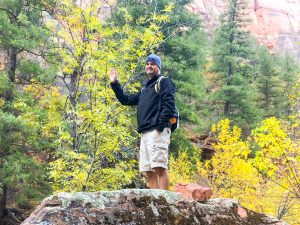 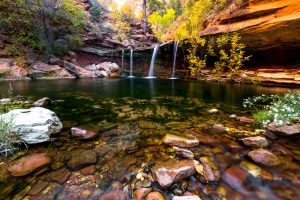 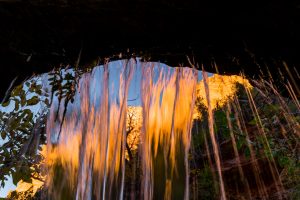 View from behind the falls of the cliffs above.

Finally we were contemplating packing up to head out.  But then I saw a steep path on the South that looked like it headed up above the falls.  We quickly climbed up this trail and over to the upper half of the falls.  It looked a little difficult to get down next to the upper falls, so I took a quick picture and then we headed back down. 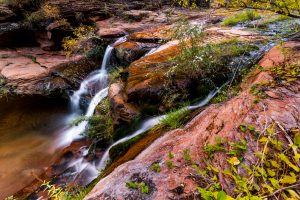 I took a minute to change from my wet neoprene socks and dress a nice blister on my heel with a bandaid.  We then gathered our stuff and headed back down the canyon.

Shortly after we began hiking down, the wind picked up and continued for the rest of the hike out.  I still stopped at several locations on the way back down to shoot some pictures, but neither the wind nor the light was cooperating at that point.  It turns out we had timed Double Falls perfectly on this day.  Following are a few pictures, all within a mile or so of Double Falls. 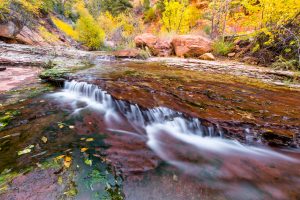 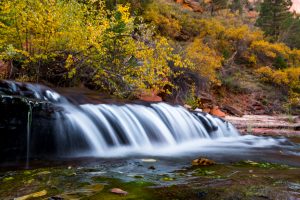 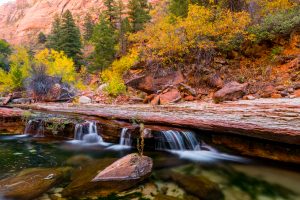 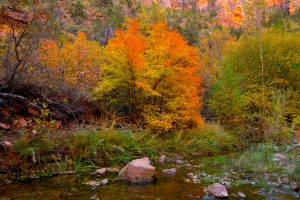 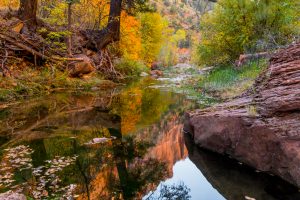 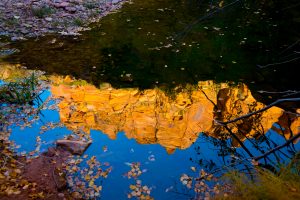 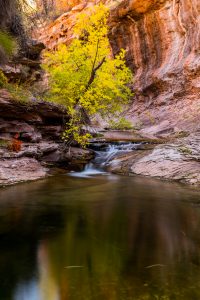 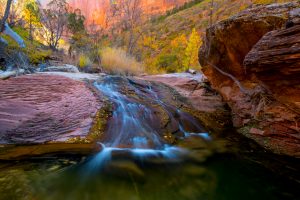 As far as light goes, I imagine direct sunlight only gets to the falls sometime after noon.  I was surprised at how much time we had with good light at the falls. 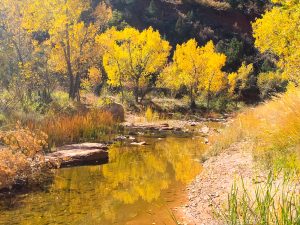 The trip back was like a whole new hike.  We had hiked most of the trail in dark, so we were just starting to see the yellow of the cottonwoods, and were also able to find the beaten path much better at this point.

Along the way we encountered an essentially deforested area created by some super beavers.  The darn things had gnawed through a very large section of cottonwoods, and it was clear the project was still under construction. 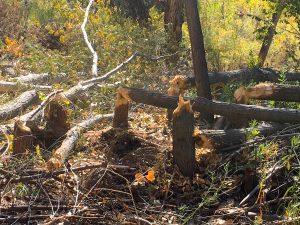 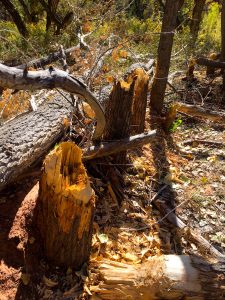 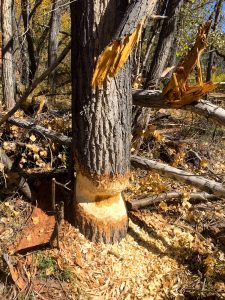 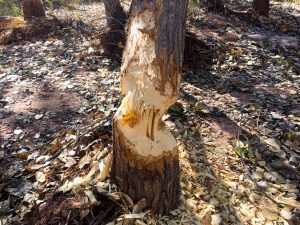 About this time, Mike decided to follow me across a downed cottonwood that crossed a deeper section of water.  It wasn’t meant to be.  Things got dicey as one of the logs slipped off to the side.  Mike kept from falling all the way in, but had to hold a pose until he was finally able to straddle one of the logs to safety. 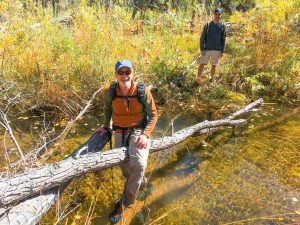 Past this the point the hike mostly turned into a warm march out of the canyon.  I shed a few layers, passed an interesting dead tree and a prickly pear forest, and we made the somewhat precarious climb up the basalt bluff and out of the canyon. 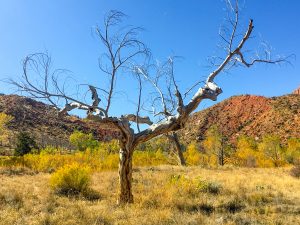 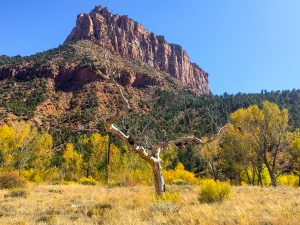 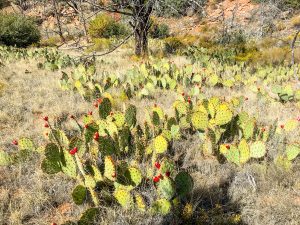 With several hours of photography included we climbed out of the canyon about 10 hours from when we entered.  Not a bad day at all, in fact it was a fantastic day.  This is a great time of year to do this trail.  But at nearly 12 miles of total hiking, be prepared with plenty of food, water, and clothing.